The wet pendulum slip resistance test (AS/NZS 4586 Appendix A) is generally conducted using a Wessex or Munro – Stanley London Pendulum Friction Tester. This pendulum device is portable and consists of a weighted foot with a test slider that swings down and slides across the surface wetted with water. The weighted foot comprises a spring loaded rubber test slider that exerts a prescribed force over the specimen as it slides across the surface. The results of expressed as a British Pendulum Number (BPN) and classified according to AS/NZS 4586 as shown in the table below:

AS/NZS 4586 classifies the surface based on the mean BPN where the Australian Standard for onsite slip testing AS/NZS 4663 expresses the result in terms of BPN. AS/NZS 4663 also provides a notional contribution of the floor surface to the risk of slipping when water wet as given below:

While there are 2 rubber slider materials that may be used, Four S (simulated standard shoe sole) is generally accepted as the material to assess the slip resistance for the general public wearing suitable footwear. TRL (Transport Research Laboratory) rubber is predominantly used for highly slip resistant and profiled surfaces. Research has indicated that TRL rubber may provide a better indication of barefoot slip resistance due to the softer yielding nature of the material, being more comparable to human skin than Four S rubber.

The dry floor friction slip resistance slip test (AS/NZS 4586 Appendix B) uses a battery operated machine commonly referred to as the “dry FFT” a or “Tortus”. The dry FFT measures the force opposing the motion of a 9 mm diameter test slider of Four S rubber as it moves across the surfaces at a constant speed of 1m/min. The average of two measurements of 800 mm is taken and the results are expressed as Coefficient of Friction (CoF). The coefficient of friction is a ratio of the horizontal and vertical forces and the slip resistance test results are classified as follows:

The wet barefoot ramp slip resistance test (AS/NZS 4586 Appendix C) uses a panel of the test surface which is constructed on a ramp large enough for a person to walk on.  Two test people attach themselves to a safety harness, after bathing their feet for 10 minutes to soften the skin, walk bare foot on the test surface while the angle of the platform is increased until the limit of safe walking is achieved. This is generally when the test walker slips or feels that they will slip on the board. The angle that the limit of safe walking is obtained is known as the mean angle of inclination. Three calibration boards A, B & C are also tested, with the classification of the test panel based on the mean angle of inclination obtained in comparison with the calibration boards.

The oil wet ramp slip resistance test (AS/NZS 4586 Appendix D) differs to the wet barefoot ramp test, in that instead of water, an amount of motor oil is placed on the test surface and the two test persons wear safety boots rather than barefoot. Three calibration boards are walked on in a similar manner to the wet barefoot ramp test. These calibration boards are then used to provide a correction factor to standardise the walkers. Studies have shown that the correction factor reduces variance to 2.2 degrees (95% confidence interval). The slip resistance test classification is determined by the mean angle of inclination achieved and a correction factor based on the angle of inclination of the 3 calibration panels. 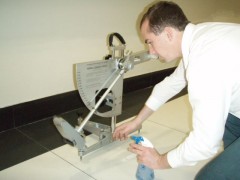 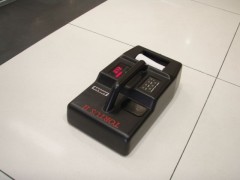 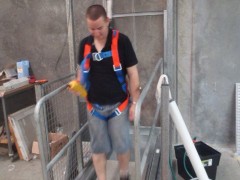