We all love to kick start the morning with a cup of coffee, but we don’t seem to think of the potential health effects from roasting and grinding coffee beans. This may have a serious health impact for those working in commercial coffee production. Occupational Hygienist, Carl Strautins discusses in detail.

Exposure to coffee dust has been associated with respiratory symptoms [1], [2], [3], [4], [5] including asthma and changes in lung function as early as the 1950s [6]. The Australian Government, Institute of Health and Welfare identify coffee dust as a causal agent of occupational Asthma [7].  The United Kingdom Health and Safety Executive in 2001 [8] assessed the potential of coffee bean dust to be considered as an asthmagen where the HSE conclude:

“There is sufficient evidence to conclude that that coffee bean dust meets the revised EU criteria (1996) for classification as a respiratory sensitiser (a cause of asthma) and labelling with R42.”

The abovementioned information provides strong evidence that there is an association with the potential for people working in commercial production of roasting and grinding coffee to exhibit changes in their health, specifically their respiratory system.

Coffee bean dust also meets the criteria as a respiratory sensitiser with a Risk Phrase R42 would be considered a Hazardous Substance as outlined within the Approved Criteria for Classifying Hazardous Substances [NOHSC:1008(2004)]. This requires everyone involved in handling a dangerous substance to take all reasonable steps to minimise the risks resulting from handling the substance in line with state and commonwealth Workplace Health & Safety Regulations.

Where are Exposures to Coffee Dust Likely to Occur?

Information on Controlling Exposures in the Workplace?

A number of documents by the National Occupational Health and Safety Commission provided information that explains the process of managing risk and the prevention of exposure to hazardous substances. These publications are available to employers, which include:

(a)  National Model Regulations for the Control of Workplace Hazardous Substances [NOHSC:1005 (1994)]

(b)  Guidance Note for the Assessment of Health Risks Arising from the use of Hazardous Substances in the Workplace [NOHSC:3017(1994)]

(c)  National Code of Practice for the Control of Workplace Hazardous Substances [NOHSC:2007(1994)]

These documents essentially outline that employers ought to undertake and document the following, in relation to the hazard health risks associated with potential exposure to a respiratory sensitiser, such as coffee dust:

(a)  Consult with employees and provide induction and training

(e)  Provide health surveillance where there is reasonable likelihood that the disease or health effect may occur under the particular conditions of work.

Evaluation of Exposure to Coffee Dust

It appears as though that there is no documented dose-response relationship to determine what levels of exposure may be considered to be reasonably safe when exposed to coffee bean dust. In general however, NOHSC 3008(1995) states that:

“It is a good general policy to keep the exposure to any substance as low as is practicable, irrespective of whether present information indicates it is hazardous or not. Some substances previously thought to be comparatively safe have subsequently been found to pose serious long term health risks.”

Specifically in relation to a respiratory sensitiser, NOHSC 3008 (1995) states:

“Some substances such as western red cedar, toluene diisocyanate (TDI) and formaldehyde can cause a specific immune response in some people. Such substances are called sensitisers and the development of a specific immune response is termed `sensitisation’. Exposure to a sensitiser, once sensitisation has occurred, may manifest itself as a skin rash or inflammation or as an asthmatic condition, and in some individuals this reaction can be extremely severe.

Following the induction of a sensitised state, an affected individual may subsequently react to exposure to minute levels of that substance. Although low values have been assigned to strong sensitising agents, compliance with the recommended exposure standard may not provide adequate protection for a hypersensitive individual. Persons who are sensitised to a particular substance should not be further exposed to that substance.”

“Not all dusts have assigned exposure standards. However, it should not be assumed that this indicates that these unlisted dusts do not represent a hazard to health.”

In summary there is significant information within the public domain that identifies that coffee dust exposure in commercial processes poses a significant potential hazard to employee health.

Safe Environments recommends that specialist advice ought to be sought is assessing, managing and controlling exposure and potential adverse health outcomes.  In-house exposure standards can be developed to provide a measure of ensuring that a management system is in place and is adequate. Consultation ought to be conducted with a specialist, such as an occupational hygienist, occupational physician and/or clinical immunologist which may include:

(a)  Review of scientific papers which outline the prevalence of symptoms  to that the airborne concentrations of coffee dust;

(b)  Consideration of exposure standards for similar plant based respiratory sensitisers;

(c)  Review the current exposure levels with the prevalence of respiratory symptoms or changes in lung function;

A review of scientific literature does not indicate a level of exposure where there is a documented level of no adverse effect. A review of similar respiratory sensitisers of plant based products identify flour dust and wood dust from western red cedar. The American Congress of Governmental Industrial Hygienists (AIOH) has provided a Threshold Limit Value (TLV), otherwise known in Australia as Exposure Standard (ES) of 0.5 mg/m3 as an inhalable particulate for these dusts. These ACGOH TLVs are available in the public domain. It should be noted that the Australian Exposure standards are largely derived on ACGIH TLVs from the 1990s.

Based on the information available an initial in-house exposure level of 0.5 mg/m3 would be a reasonably practicable level to minimise risks, on the basis of the limited information available. This level may not protect all workers, however should reduce the incidence of respiratory symptoms as an initial benchmark. It should be noted as it is within NOHSC 3008 (1995):

“The exposure standards do not represent `no-effect’ levels which guarantee protection to every worker. Given the nature of biological variation and the range of individual susceptibility, it is inevitable that a very small proportion of workers who are exposed to concentrations around or below the exposure standard may suffer mild and transitory discomfort. An even smaller number may exhibit symptoms of illness.

It follows from the foregoing that the exposure standards are not fine dividing lines between satisfactory and unsatisfactory working conditions, but rather that they are best used to assess the quality of the working environment and indicate where appropriate control measures are required.”

Consequentially exposure to coffee dust should be reduced to As Low As Reasonably Practicable (ALARP).

Much of the available literature relating to coffee dust indicates that activities such as roasting and tipping beans in commercial processes would exceed 0.5 mg/m3. The exposure investigated by Thomas et al (1991) were between 1.3 mg/m3 for roasting and 3.2 mg/m3 for both container unloading and tipping exposure groups for which respiratory symptoms of wheeze, cough, or dyspnoea were reported by 12-7%. They conclude by stating that ‘all practices to minimise the exposure of the workforce to this antigen should continue’.

Sakwari et al [9] (2011) measured the airborne concentration levels (Geometric mean of 1.23 mg/m3) for coffee workers in Kilimanjaro and reported that there was a higher prevalence than the control group. It is advised that:

“Interventions for the reduction of dust levels and provision of respiratory protective equipment are recommended due to the fact that exposed workers suffer from respiratory symptoms.”

Where Personal Respiratory Equipment (RPE) is used to minimise exposures, a P1 mask should be a minimum as an interim measure. Where RPE is utilised a system requires to be developed to manage the training selection and use as outlined within AS/NZS 1715:2009 Selection, use and maintenance of Respiratory Protective Equipment. It is important that workers are clean shaven and respiratory fit tests have been conducted to ensure that workers are receiving at least a minimum of 10 times protection factor.

Controls should be implemented to reduce exposure to coffee dust at the source through the Hierarchy of Controls. In the same updated study, Sakwari et al [10] (2012) concludes that the

“Installation of exhaust hoods on hoppers, the gravity table, hullers, and in husk storage areas could reduce the amount of endotoxin and dust suspended in the air. Appropriate respiratory protective equipment should be used by all production workers during processing.”

Epidemiological evidence through measuring airborne concentrations of coffee dust are requires to determined whether there may be a disproportionate number of people who may fall ill to injury and illness through coffee dust exposure. The actual levels of inhalable dust concentrations should be conducted to AS 3640 Workplace atmospheres – Method for sampling and gravimetric determination of inhalable dust. The results of testing should be undertaken on a number of days to allow for statistical analysis including the potential for inter-day variability and assessed at the 95th confidence interval, given the nature of the hazardous substance.  This information ought to assessed in consultation with an occupational hygienist, occupational physician and/or a clinical immunologist.

Airborne concentrations should be reviewed in line with health monitoring of workers exposed to the coffee dust as it is a respiratory sensitiser. Health monitoring ought to be considered in consultation with a registered medical practitioner which would likely include questioning of respiratory symptoms including and an assessment of lung function (Spirometry). This approach is recommended by Smith et al [11] (1985) who state:

“A programme of worker surveillance should be instituted immediately, with the aim of the early removal from exposure to dust of any worker who develops symptoms or signs of chronic non-specific lung disease.”

“Atopic workers or those with non-specific bronchial hyperactivity  should be followed up and, if their lung function becomes impaired or they develop respiratory symptoms, they should be moved to another job.”

Health monitoring is an important, if not critical aspect to managing health of a worker who is exposed to a respiratory sensitiser. Specialist advice should be sought particularly if employees have a history of asthma. Pre-employment cheeks ought to be set up as not to expose asthma sufferers to employees to an asthmagen, such as coffee dust in the workplace, the potential consequences, and health monitoring..

In summary health monitoring may indicate significant symptoms or changes of the initial health assessment, so that management strategies or removal of the worker can take place to limit any further respiratory injury.

This article was written by Mr Carl Strautins, Principal Occupational Hygienist at Safe Environments and is based in the Sydney Office (Phone: 02 9621 3706). For more information on eliminating or reducing exposures to Coffee Bean Dust, please contact Safe Environments in Sydney or Melbourne and email info@SafeEnvironments.com.au. 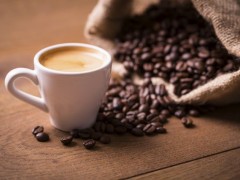 A good cup of coffee may help to kick start the day, but herhaps not the lungs 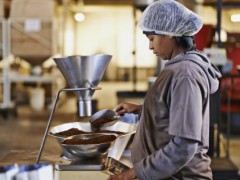