What are Asbestos Fire Issues?

Which buildings can have asbestos fire issues?

Properties constructed prior to 1990 in Sydney & Melbourne are likely to contain asbestos within their fabric. In residential building the majority of asbestos is found within the wet areas such as bathroom, kitchens and external eaves. Asbestos fire damage in such properties can spread to neighboring properties and cause asbestos fire contamination in a much greater area than that of the building’s own foot print.

Most airborne asbestos release which results from asbestos fire damage occurs during Spalling of materials such as Asbestos Cement Sheeting (Explosion of cement sheeting caused as a result of built up of steam within the cement matrix). Asbestos fires do not completely destroy asbestos containing materials, but can cause significant extensive damage to structural integrity of asbestos containing building materials, which would in turn lead to release of airborne asbestos.

What to do in the aftermath of an Asbestos Fire?

The major issue with Asbestos Fires is the debris left behind which can be very fine pieces and/or bundles of asbestos fibres which can be spread to a large area as a result of Spalling. Asbestos contamination can be found within ash and dust after and during an asbestos fire.

In an event of asbestos fire damage the following steps should be taken: 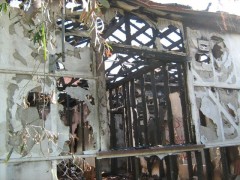 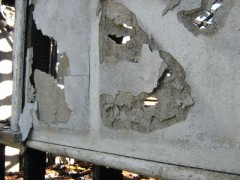